When you put the gap between the winning Ferrari #51 and the other cars into a chart, you can see how close the battle was at the beginning of the race until one after the another got problems. But it also shows that the Corvette #73, who were 10 minutes behind after 2/3rd of the race reduced the gap to 5 minutes to the end of the race – really, really quick machine!

Negative values mean the Ferrari was behind, positive infront of the opponent. 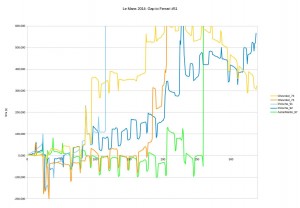 I choose the quickest car of each manufacturer for this chart and it seems that all were able to do 14 laps per stint, only Corvette had to switch between 13 and 14 laps, while Porsche clearly shows their fuel cell trouble.

This chart surprised me a little. The cars were almost equaliy quick – the difference was just between 2 or 4 km/h. If I had to sort the cars, I would say Ferrari quickest, followed by Corvette and Porsche with the same topspeed and the Aston Martin slightly slower. Remeber these data come from the official speedtrap and I can’t tell if this is already under braking, etc.

The Porsche #79 again is slower and the Ferrari #71 seems to be quicker, but he did only 28 laps. 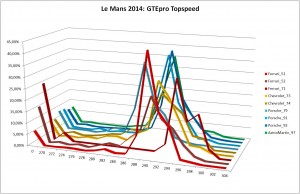 For now, leaving LMP1 behind, maybe I will bring some more later.
GTEpro was fascinating to watch. Nice battles there and the #79 Porsche had only two drivers. A quick look at the laptimes shows, that the Aston Martin #97 and the quicker Corvette clearly did the fastest laptimes, but you have to bring it home to win a race – or you need to have more luck with the safety car.

The #79 Porsche is not shown here. The car, a Porsche 997 GT3 RSR, was way slower than the other cars in the class. 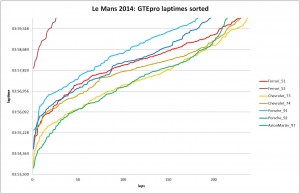 In Le Mans teammates should be the best budies and together they should be the best unit. Take one driver out and put the next one in and you can be confident that he brings the car home in one piece as you would do. And he is quick, as you are. But he is also the next competitor. Both use the same piece of hardware and the same setup.

But remeber, when you look at these pictures, that laptimes can be influenced by team order, by fuel or race strategy or tricky weather conditions. Doing it a bit slower can be way faster at the end. 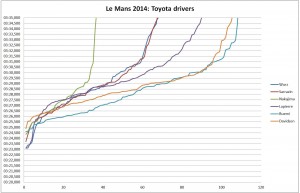 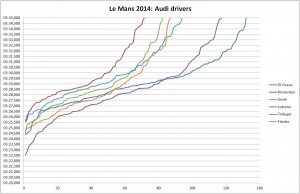 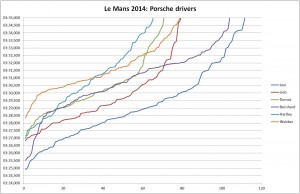 Who had to work the most for the money in the factory cars. 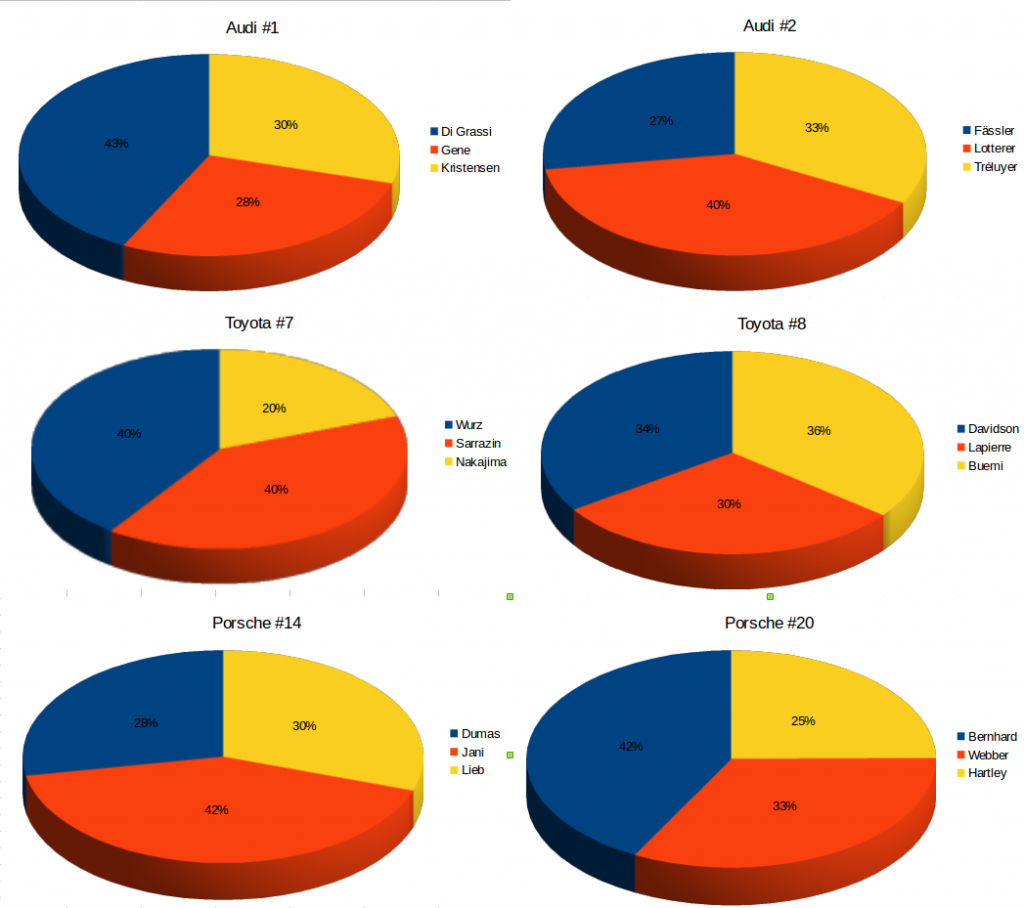 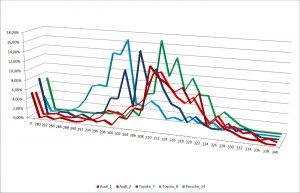 Le Mans 2014: LMP1: Gaps between the winning Audi #2 and the competitors

This graph shows the gaps between the winning Audi #2 and the other factory LMP1 cars.

How to read this?
Negative values mean the car is infront of the Audi #2, positive they are behind.
The little ripple come from pitstopps.

What we can see is, that the Toyota #7 was in the lead all the time (as we know) until it broke down, but because the line is relativly flat, both car did very similar laptimes. A reason could be that the Toyota took it easy or both cars were very equal.

The Porsche #20 tells a different story. Over the laps the graphs is rising, because the Audi #2 was constantly faster until around lap 250, when the turbo of the #2 had to be changed, and the Audi #1 and the Porsche #20 entered P1 and P2.

Before the 2014 race, ACO and FIA installd the Slow Zones to reduce the safety car problems where others can be penalized just because the safety car came out at the wrong time. Unfortunatly the safety cars came out this year again and again some had a big gap of a few minutes. Which can easily be seen at around lap 25. There has to be something for the future! 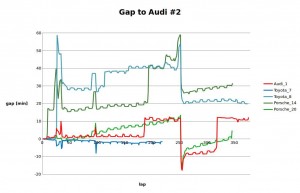 Quick look at the laptimes.

The graph shows very clearly, that the Porsches surprisingly haven’t had the pace of the Audis and Toyotas over the distance while the Audi also surprisingly were close to the Toyota. My guess the Audis, especially #2, had to go really flatout, while the Toyota did it more easily. However at the end Audi won – again.

3:22min of André Lotterer was another surprise to me. He nailed it again.

Never underestimate Audi over the distance is something Peugeot had to learn and Toyota got the lesson the hard way, too. Will try to display that. 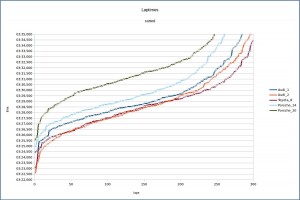 I think we have seen one of the best Le Mans races of the past years and I will throw in some analysis the next days. There is one thing that impressed me when I had a quick look at the race datas:

Porsche #20 did a very clean race. Only schedules stopps and all within the same times, without the bad luck at the end, when the motor stopped working, they would have finished a good result. Audi and Toyota pitcrews did both awesome jobs. There is no difference between the two companies – always perfect work. The Porsches were always 5-10s slower. Rumours say they had problems to fill the ful cell as quickly as the others do.

To me, the pitcrews are always the heroes, who have to do perfect jobs all the time, the whole week!