Todays analysis is a bit shorter.This picture shows the lap by lap gap between the wining Audi #2 and second placed Toyota #8. You can that the Audi in general was quicker – no surprise, it was discussed before, but you can also see when one of them had luck or no luck during the safety car period. For me, the SC rules should be discussed, but rules are rules and everyone has to live with them. 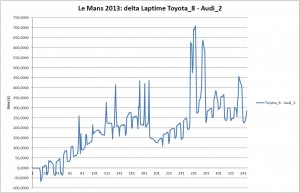 Another point is about hard to compare, because there is one rule: never blame the pitcrew! These guys do an unbelieveable job, work whenever it is neccessary and under every possible situation! While the driver is already dreaming in his hotel, the crew is still preparing the car. Looking at the pitstop times – these guys work like clockworks – I mean, swiss clockworks! 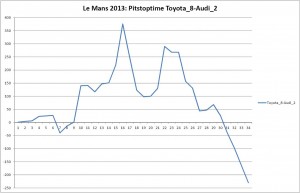 During the first part of my analysis I made the suggestion, that the #2 Audi tried to save fuel. Average topspeed and laptimes let me make this  idea work. In reality they had the most stops of all 5 cars.

But they seem to have a different strategy as you can see in the following table. I think it is fair to say, that everything above 12 laps/stint for the Audis is caused by the weather situation or a safety car period, while all more than 13 laps for Toyotas is unusual. Mr. Gauss would love this table, because it says, that #1 & #2 were set for 10 laps, while #3 was set for something between 10 and 11 laps – going faster, doing less laps and viceversa. Toyota #7 did the expected 12 lap job, but surprinsingly the #8 regularly did just 11 laps. The two parts before fit perfectly into the forming picture, that #1, #2 and #7 did what everyone had predicted, while #3 and #8 fitted into the gap between. 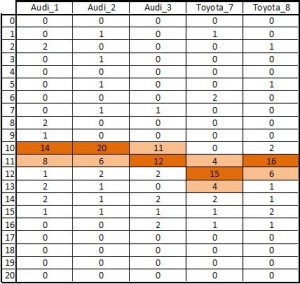 The first part of my analysis showed a different speed of the #3 Audi. My suggestion and some rumours came to the result, that Howden „H“ Haynes had a different idea for his car. Probably no blown diffuser? Or not using the special engine mapping. So I took a closer look at the qualifying times, which show a very similar result: Good topspeed, but a Toyota like performance in the Porsche Curves, the highspeed handling part of the track.

In 2012 the first time hybrid cars took part at the Le Mans 24 hour race. Both manufacturers, Toyota and Audi, use evolutions of last years model, so I think it is worth to have a look at them, too.

You should know, that the times of the #7 and #8 Toyota were incomplete and may not show the maximum.

Compared to last year, #1 and #2 machines show a much faster performance as expected, while the #3 car could be a copy of the 2012 machine regarding lap- and sector times.  Toyota clearly didn’t show their performance during this years qualifying which still let me believe in the economic strategy. But a kind of riddle to me is the Toyota strategy in total. Different air intakes, slower performance than 2012 and the #8 quicker than the #7 car, which I believe has the faster crew. 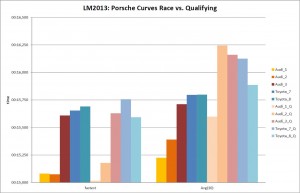 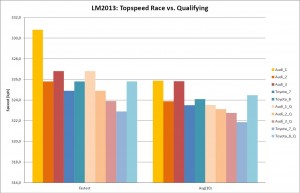 Le Mans 2013 was very special in many ways and will be in our minds for very sad moments, but also for a very tough battle between the two manufacturers Audi and Toyota. As always during the last years I’ve done some analysis of the race afterwards with some interesting details.

The Audis were quick, that was no suprise and Toyotas chance was better fuel consumption. To be precise, the petrol car had a larger fuel tank capacity compared to the diesel, so they were able to stay longer.

How quick is quick?
Having a look at the topspeed shows a really fast #1 Audi, but on the average speed, the #3 makes a significantly more constant performance. During the race different sources told the story of one Audi didn’t take advantage of the blown diffusor or maybe the blown-diffusor-engine-maping. If this is correct, I guess it was the #3 car and I will explain later why. 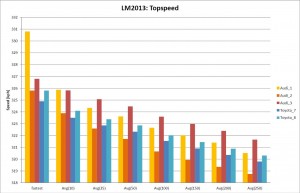 Remarkable: Audi #2 did slower speeds and also the expected quicker Toyota #7 had slower topspeeds than the sister car #8. There could be different reasons why. Depending on the position of the speed trap on the track, some cars could already be under braking while others were still flat out. There are good reasons, that the #2 Audi tried to save fuel and one opportunity is early throttle lift and rolling through the corners(sounds funny „rolling“ with more than 300kph).

To find out how quick quick is, looking at the topspeed is only one tiny bit on the way to the answer. Drag and topspeed are usually no friends, so a closer look at the highspeed handling part of the track should be the next step. Porsche curves – the „wow“ part of the track. An onboard on a clear lap from one of the prototypes is really breath taking. No matter what car, it is very impressive, but there are still differences. Highspeed and a good handling by a lot of downforce these are the key factors for this part of the track.

Take a look at the timing at this part of the track. The Audis fastest times were over half a second quicker of… wait… only the #1 and #2 Audis were lightspeed quick in this part.

The #3 car was in the same region as the Toyotas and over the race even slower. Isn’t that interesting? Let me remind you of the rumours a bit above of this text and make your own thoughts. Anyway noone is surprised that Audi in general was able to go a lot faster here than Toyota.

And they had to. After quailfying it was said Toyota could go 12 laps while Audi had to refill after 10 laps. In that case, Audi had to go around 1.5s per lap faster than Toyota. Looking at the pitstops, the Toyotas were not able to use their advantage. The wining #2 car wining #2 car stood just 3:50min longer in the pits – that is just 0,67s per lap.

There are different reasons for this. The weather made almost every calculation to a kind of guessing, very many and long safety car periods didn’t help as well. In opinion the use of three safety cars t the same time is wrong. During the SC period they should try to bring all three groups together and form one complete group. But back to the analysis…

I have to say at this point, that the pitcrews did an awesome job – from every team! They did change tires like clockworks and it is a pleasure to watch these guys dancing around the cars! Very well done, boys!

After the details looking at the total lap and the single sectors let get to the result, that the #1 car was the set to make the pace. The guys are young, quick, already very Le Mans experienced and two times winners. Without the alternator/generator failure I think they would have won the race by far. The #2 the most experienced team was the backup crew. Quick, but set to be just a bit faster than the opponent, fuel saving compared to the #1 car. Audi #3 was on a different strategy I think. Setupwise closer to the Toyotas than to their sister cars. Interestingly was the #8 the faster car than the #7 and I think they had more problems than said. Maybe the hybrid systems didn’t have the performance(temperature of the supercaps?).

These are all my thoughts and I may be wrong, but I would love to set these assumptions for discussions – feel free to say your opinion!

The terrible crash at the beginning made everyone feel sad, but the teams did, what Allan loved most and from my point of view is this the best way to show his respect. The battle between Audi and Toyota was awesome, but there is something unsaid, but you can feel the deep respect both teams have for the work, the knowledge and the spirit. It is far, far more respectful than years ago. You can feel it and you can see it during fights on the track. And that’s the way we want to see the competition! 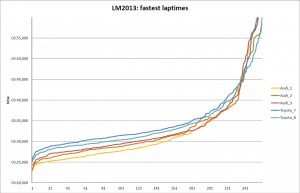 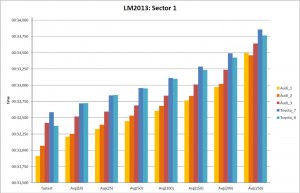 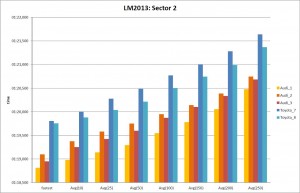 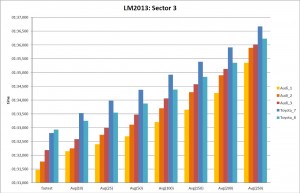